Many years ago I used to curse the overly complex 4-5 piece RCA plugs which were often referred to as ‘SME’ plugs.

I don’t know if SME made them but they were dreadful.

Often attached to arm leads the wires would shear, come loose and cause all sorts of intermittent problems.

The screen wires were trapped by a threaded portion which would soon enough break off the filaments or develop a loose connection.

To my surprise, some Chord cables use a similar design of RCA plug with a plastic outer casing. 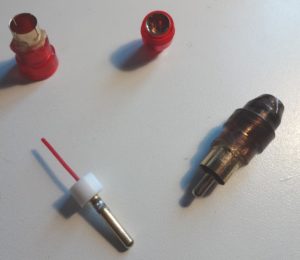 My Chord iChord lead has been very unreliable with the centre pins sometimes sticking in the socket and the plastic body sliding off the plug (hence the ugly glue fix) and the same issues with the screen- pinching piece needing tightening and the screen coming detached.

Now, the last straw, the earth has sheared causing a rare drive-unit to be blown…